The reinforcement of surveillance changes nothing. Five central nuclear French have been flown by drones tonight. Overflights took place between 19h and midnight on the night of vendred to Saturday. Plants covered are Penly (Seine-Maritime), Flamanville (Manche), Saint-Laurent-des-Eaux (Loir-et-Cher), Dampierre-en-Burly (Loiret) and Fessenheim (Haut-Rhin). Some had already been flown over the previous days.

On the night of Thursday to Friday in fact, had already flown gear central Golfech (Tarn-et-Garonne) and Penly (Seine-Maritime) “without consequences for plant safety, “had indicated EDF .

Approached by AFP, the Ministry of the Interior and the National Gendarmerie n have not wished to comment immediately. EDF also interviewed, declined to confirm this information

A total of 14 nuclear power plants were flown by drones since the beginning of October, with no impact on plant operation or safety. The NGO Greenpeace has expressed concern “of the occurrence and recurrence of these suspects overflights.”

The first flyby of a “comparable to a drone aircraft” was detected on October 5 above the plant deconstruction Creys- Malville (Isère). Other overflights occurred over central Gravelines (North), Cattenom (Moselle), Blaye (Gironde), Bugey (Ain), Chooz (Ardennes) and Nogent-sur-Seine (Aube). These drones were spotted by teams protection of sites, mainly during the week of October 13 to 20, usually at night or early in the morning.

According to the Greenpeace anti-nuclear, “overflights question occurred sometimes on the same day four remote sites, Bugey, Gravelines, Chooz, Nogent-sur-Seine on October 19, for example, which shows a large-scale operation.” The site of the Commission for Atomic Energy in Saclay (Essonne) was also flown.

The army and the Interior not worried …

“There is a criminal investigation underway , there are provisions that are made about and then there are also provisions that exist (…) to neutralize these drones “, said this week the Minister of the Interior, without giving further details. “I am of course aware of this and investigations unfold,” said he added. Colonel Jean-Pascal Breton, a spokesman for the Air Force, played down the threat posed by these weapons, noting that they were all small and that the authorities had only testimony. “The drones that have been raised by the evidence are mini-drones of any small to sell in the trade,” he said at a press conference. “The level of threat is not considered significant for us to generate the implementation of special devices other than those that are implemented now,” he added. It is estimated that given the size of drones there is no proven threat against installations themselves. “

Greenpeace, which “denies any involvement” had, in May 2012, filmed with a drone one of its activists flying over the central Bugey with a paraglider motor before landing. The aim was to challenge the authorities on the “vulnerability” of nuclear sites in an air attack. In addition, since 2007, members of the NGOs are introduced to a dozen times in plants, as last March in Gravelines and Fessenheim. This time, Greenpeace calls for investigation to the authorities. “We are very concerned about the occurrence and recurrence of these suspects overflights without any response on their origin is provided by either EDF or by the police, “said Yannick Rousselet, responsible for nuclear campaign, said in the statement.

GRAPHICS. Map of all sites flown 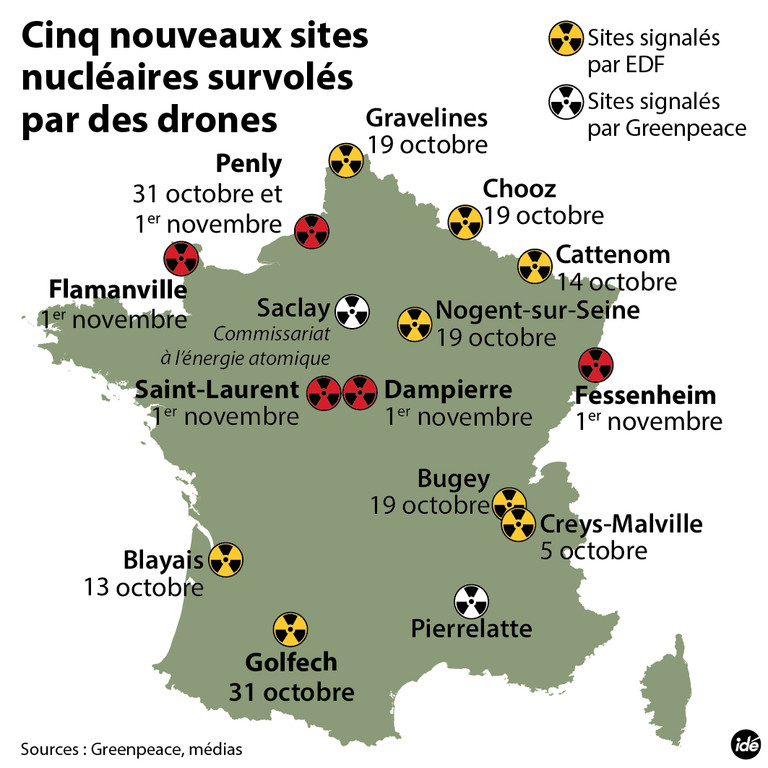 EDF had not reported these incidents globally until Wednesday, but announced piecemeal deposits complaint on the websites of each of the plants. “We do not express us outside our area of ​​expertise,” for its part, told AFP the Nuclear Safety Authority (ASN), responsible in particular to ensure that the plants are designed to withstand accidental falling an airplane or terrorist attacks. As recalled ASN Aviation Safety reports to the central high official defense and security under the Ministry of Ecology and Energy. Overview of nuclear power plants is prohibited within a radius of five kilometers and 1,000 meters around the sites. The airspace above nuclear power plants is monitored by the Air Force, as part of an agreement with EDF. France has a total of 19 nuclear power plants, all 58 reactors operated by EDF.

Video. nuclear Observatory: “The demonstration of the failure to protect plants”

Video. Where the drones flew over the French nuclear power plants come from?

Posted by Pronegrot at 8:28 AM